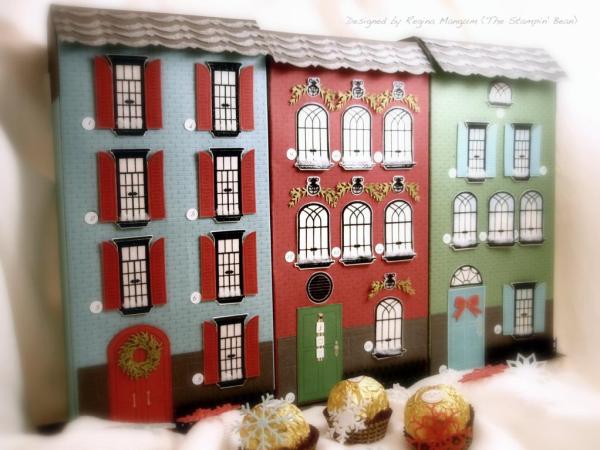 Photo from The Stampin’ Bean

The Holiday Season is fast approaching, and Little Guy has been anxiously waiting for every morning when he gets to open another door on his LEGO advent calendar.  He’s also been asking if it’s Christmas yet…every day…and every day we tell him that when all of the doors are open, THEN it will be Christmas.

“Well then come on, let’s open all of them.”

Makes sense.  I mean, I did just give him a direct cause & effect scenario, and logic based on what I said would tell you that the fastest way to get to Christmas would be to just get on with it and open the doors already!  I told him that’s not how it works.

Here’s the fork in the road.  As a three year old, Little Guy asks “Why?” approximately 4,000 times a day.  I answer all of his questions until around 3,600 when the answer starts to become “because that’s the way it is.” or something like “pineapple head” so he knows the difference between a real answer and me just trying to get past the question and move on with our lives.  Obviously you can’t just open all of the advent calendar doors, because when Christmas doesn’t immediately appear, there’s going to be a lot more “Why”s to answer.

“Dad, my truck won’t stay on top of my LEGO tower.”  He’s trying to balance a 24″ long truck on top of a 4″ stack of LEGOs.  I tell him that’s silly and that the truck is too heavy, the LEGOs are too small, and that’s just never going to work.  “But Why?  I want it to work.”

I’ve run into countless difficult scenarios in my career.  I see challenges every day at my firm Studio m Architecture + Design.  Limited area on a building site dictates the shape and size of a new structure.  An impossible amount of the Client’s desired spaces just won’t fit into the amount of square footage that they are about to lease for the next 5 years.  The ridiculous budget number available for a residential project is unreasonable and so tight that you can’t do anything with it.  Never once have I told any of these people that what they are trying to do is “silly”.  OK, maybe I said that to the guy trying to build a 3,500 square foot house for $100,000, but he really was being silly.

Often, in the design process, I ask myself. . . “Why?”  I’m frustrated.  Things aren’t working.  I don’t think I am going to come up with a solution that works. . . . why?  Isolate the problem.  Identify the issue.  Solve the one piece that’s causing the roadblock, and the problem starts to solve itself.  Find the better way, and the “WHY” goes away.

The LEGO structure was retrofitted with a second tower, a wider base, and top platform for the enormous truck to rest on.  It wasn’t failing because the idea of the truck on top of the tower was ‘silly’, it was failing because we hadn’t explored a better way to do it yet.  Not only did we solve the problem, but we found satisfaction in knowing we came up with the solution that worked.

There can’t be 4,000 life lessons in response to the continuous stream of “why”s that exist every day.  When Little Guy asks why he has to go to bed. . . . “pineapple head” is sometimes a better answer than trying to collectively brainstorm about the optimal sleep cycle routine and why right now might not be the best time after all.  However, I think it’s up to me to realize that sometimes there is much more behind a “why”, and maybe the best answer isn’t always “because that’s the way it is.”  In that respect, I kind of hope the WHY never ends.

Cardboard and blankets work just fine, but we’ve noticed that Little Guy is getting more demanding with his fortbuilding requirements.  Build Abouts look like a pretty interesting modular product that might be perfect for indoor Winter playtime.